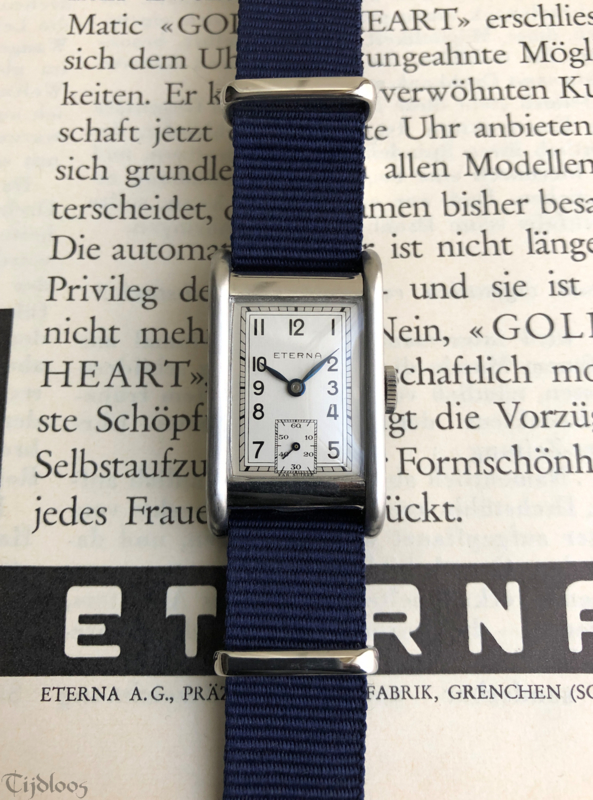 Beauty is in the eye of the beholder! Hidden away for approximately nine decades the Eterna patiently awaits his very first owner. Could that be you? Even though the watch is ‘New Old Stock’ and has never been worn, the movement still needed a fresh overhaul mainly to remove the old oil, which in those days would have been obtained from a non-synthetic source such as animals and that has the tendency to clot, unlike the new synthetic oils used nowadays which stays thin and soft.

Other than the overhaul on the movement the watch is untouched, the matt sanded finish on the sides and back, the shiny parts in-between and the crown that actually feels crisp to the touch, the fine blued-steel hands and glass crystal with the slightest dome shape toward the middle. The inside of the case back reads BREV.DEM which means it has a Swiss patent number, Eterna Fabr, Suisse - speaks for itself and Acier – Steel in French, Staybright – good quality type of steel used.

The basis of the movement is from ETA 735 which has received several modifications for the Eterna brand, hence the caliber 740.

Keep in mind that Eterna is one of the up and coming brands according to watch chit chat, so it's worth keeping an eye out for.