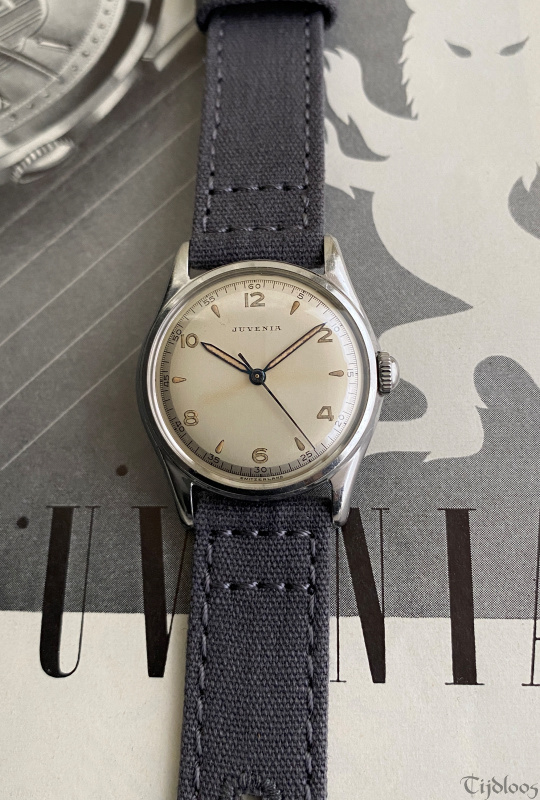 The Juvenia brand has made some amazing, cutting-edge, avantgarde watches over the years, and they have been at it long enough, since 1860 to be exact. Yet they often tend to take the back seat on popularity, you could say it’s unfortunate, or not so much, uhumm…let’s be honest prices
tend to rise with popularity so this might not be such a bad thing.
The Juvenia at hand is a joy to look at, it unmistakably dates from the 1950’s. Juvenia has an appealing letter type/logo in my opinion, but what makes this so unusual is that Juvenia
has signed not only the case back on the outside, but also on the inside, so make no mistake this is unquestionably the real deal ???? The case also consist of a dust cover/anti-magnetic shield, which is a very welcome bonus in this day
and age with so much magnetism/electric fields surrounding us. The little nipple in the middle of the dust cover is meant to secure the movement when it pushes down onto the movement while closing the crew-back case. The case has a sunken crown, which is yet another bonus. The original dial might have become a warmer creamy-color over the years, which is definitely not a disadvantage. It does have slight radium burn though, which seems more visible in the photos,
then in actuality. The 1080 caliber movement is a well-known frequently used caliber from ETA, but for particular brands such as Juvenia it has received a refined finish.Unpolished case, and all original.