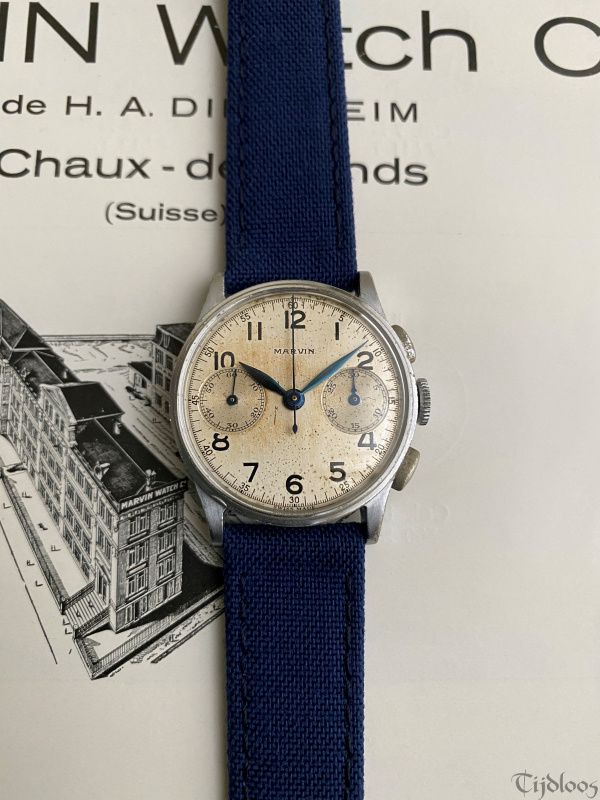 Though Marvin is a relatively small, for many unknown Swiss brand, this doesn’t automatically mean, less desirable. They have made some truly out of the box watches over the years, with superb quality movements.

This mid 1920’s Marvin Chronograph is a stunner, the case is chrome plated, except for the case back which is stainless steel. Chrome plated doesn’t have my preference, but in some cases, you need to make an exception, and this is definitely one of them. It has some nibbling on de back of the lugs, but this is too be expected of a chrome plated watch of this age, nothing out of the ordinary.

Need I mention an all-original watch? Well not quite, the crown has been added, its predecessor had disappeared. The substitute crown looks a tad too good to be true, but give it a few years of daily winding and it will soon ‘look the part’

benefit is though, that this crown is sharp and crisp giving it good grip for winding.

The Valjoux caliber VZ is renowned for its high-quality manual wind chronograph movement, it is the basis for the many following Valjoux calibers thereafter. It has been in production for an astonishing time, almost 60 years, to be exact from 1916 to 1974.

The dial looks much better in real life, it looks as if the photos have exaggerated the aging. In actuality it looks really good, and all the indexes are clear and vibrant, it reads easily. The blued steel hands are in gorgeous condition too.

We have added an animal friendly canvas strap in an Egyptian blue color. This strap is also available in 20mm on request.